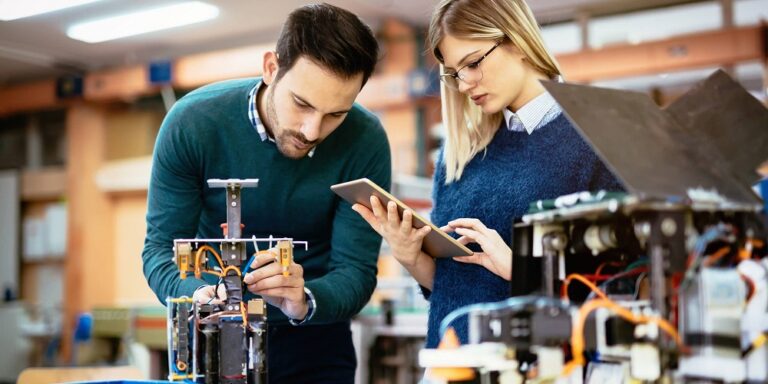 Robotics is an exciting career path. Let’s take a peek at the top robotics engineer companies. Robotics is a multidisciplinary field of study concerned with robot design, building, and operation. Robots have quickly become a prominent trend in the industrial industry. According to experts, this tendency will continue to grow. Robots are used in industries, businesses, and families to perform activities that humans cannot. Robotics is the study of constructing intelligent robots that can help humans and their industries accomplish their jobs more efficiently and quickly. Robotic engineers can efficiently create autonomous machines or robots for the automotive, mining, and industrial industries. India is one of Asia’s fastest-growing technology markets and is quickly moving toward automation.

According to studies, the industrial robotics market in India will grow at a 13.3% CAGR between 2019 and 2024. So if you enjoy robots and want to work as a robotics engineer, these companies are worth investigating.

This California-based robotics behemoth focuses on designing and enhancing car and mobile computing chip units. It announced cooperation with Toyota and hopes to use NVIDIA’s AI technology to create self-driving cars in the near future.

Neurapses Technologies PVT.Ltd. owns and operates this educational branch. Every year, it instructs around 2000 students in robotics and artificial intelligence at colleges and schools.

It is a worldwide technology start-up specializing in cloud robotics. The company created the first enterprise-level Platform-as-a-Service (PaaS) for robots. PaaS is intended to give novel capabilities that can be used to manage every step of a product’s life cycle, which is required to provide end-users with stable and scalable robot solutions.

It is the parent company of a German-based robot and one of the world’s major industrial machine makers. There are offices all around the world. In addition, Midea Group, a Chinese electrical appliance maker, was established in 2016.

EDAG, a provider of engineering services, produces and optimizes manufacturing plants and automobiles. Because of its 360-degree competence and independence, it is a valued engineering partner throughout the vehicle development process.

Consumer robots from iRobot, one of the most popular robotic companies, are in high demand. For example, the Scooba floor cleaning robot and the Roomba wireless vacuum cleaner are widely available on the market. iRobot also manufactures military robots such as PackBot for detecting threats in urban combat and bomb disposal. iRobot is now collaborating with Boeing to speed up the commercialization of its self-driving car technologies. This will motivate robotic engineers and other colleagues to work on new ideas.

Businesses may use the company’s robotic technologies to create a flexible, customer-centric supply chain. Adverb’s robotics solutions have changed millions of lives and helped numerous businesses grow. This company is a market leader in robotics, consultancy, system integration, and other related services.

This robotics company specializes in the design and maintenance of vision systems. This company has 3D cameras that can correlate image pixels with physical locations to aid in the movement and control of robots. These systems are installed in ABB’s TrueView robotic system, which includes Briantech vision guidance systems. As a result, it has gotten a lot of interest from many industrial sectors worldwide.

My article on Top Robotics Engineer Companies is now complete. I appreciate your consideration! I hope you found this useful.